As reported in the Irish Times: Dublin city centre is to get 800 solar-powered “compactor” bins, which could reduce the number of on-street rubbish bins by 20 per cent, according to Dublin City Council. Irish firm Kyron Street was awarded the contract to provide the smart bins, which have real-time information to tell waste collectors when the bin is full, and cut down on unnecessary collection runs. 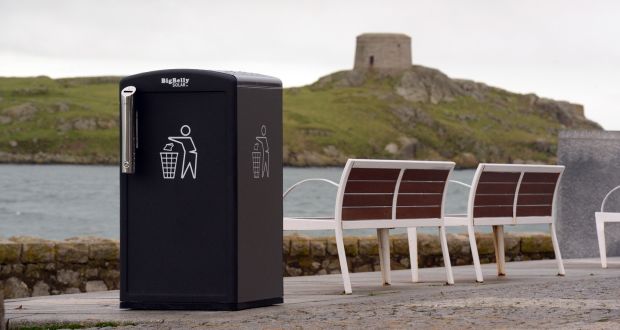 One of the Big Belly bins in Dalkey, Co Dublin. Photograph: Cyril Byrne / THE IRISH TIMES

The bins have compactor technology to crush rubbish, which means they can hold significantly more waste than ordinary litter bins. Currently there are more than 3,500 bins across the Dublin City Council area, with about 1,200 bins in the city centre. The local authority estimates by installing the solar-powered bins in place of regular litter bins, the number of on-street bins needed can be reduced by about 20 per cent.

The smart technology in the bins runs on a rechargeable battery, that is powered entirely by solar panels. The contract is part of a push to bring in smarter technology across the four Dublin local authorities, under the “Smart Dublin” project.

The contract requirements stated the solar-powered bins should have scope to fit into other “innovation trials and joint research and development projects” the local authority runs. It outlined that these could include trials to collect footfall, air quality, noise and traffic management data.

Dublin city Green Party councillor Ciarán Cuffe said the move was a “step in the right direction” by the local authority. “These bins alert staff when nearly full, which is great as we do have a problem with overflowing bins,” he said.

Dún Laoghaire Rathdown County Council had to retrofit the bins with special brackets to reduce the size of their opening. The bins, which have a wider pull-down opening than regular litter bins, had been used by people illegally dumping their household rubbish.