The bins have a solar compactor, which means they don't fill up as fast.
(Image Credit: SIMON O'CONNOR/STUFF)

The grass is now greener at Mt Bryan Reserve with new solar bins helping keep the rubbish off the ground. Rubbish problems have plagued the popular seaside lunch spot, colloquially known as Pig Out Point, for a number of years with the New Plymouth District Council (NPDC) struggling to find a solution. In 2013 the council controversially removed the bins in an attempt to reduce litter but the trial failed and the bins were returned a few months later.

Since then, [Bigbelly] solar bins have been installed in a trial and are getting good results, New Plymouth District Council parks and open spaces manager Stuart Robertson said. "They're less trouble than traditional bins because no litter can get out and they don't need to be emptied as often. We're finding them extremely effective," he said.

Graham Johnson, who has overlooked Pig Out Point from his home on Octavius Street for 16 years, said the bins had made a big difference. "There has definitely been an improvement down there," he said. Johnson said the area had always been busy with storm chasers, lunch eaters and occasional riff raff. 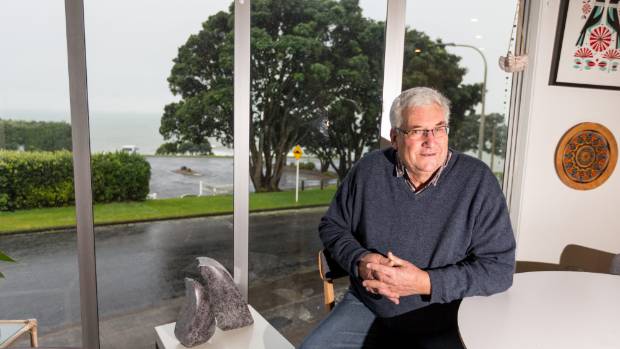 Graham Johnson has lived near pig out point for 16 years and says the new bins have made a massive difference.
(Image Credit: SIMON O'CONNOR/STUFF)

"There's always been rubbish and we had things like vandalism, people setting fires to bins, all that sort of stuff," he said.  "But I'm definitely happy, and you're never ever going to stop some people doing what they do." There is also a bin at Kawaroa Park and another was installed in Okato in May, Robertson said.

"At this point they look to be cost-neutral and they're proving to be robust in our coastal environment. They're working fine despite the salt spray and we've had no technical difficulties with them." He said any repairs to the bins, which have a 125 litre capacity and a solar compacter, were covered by the Auckland leasing company, but only one had been damaged so far. "They're proving relatively hardy."

The [Bigbelly] bins had been successful for both litter management and operation cost, he said. "The bins compact the rubbish so there's more room available for people to use and we don't have to empty them as often. "If they're used a lot in a short space of time and fill more quickly than expected, we get a signal that they're ready to be emptied and we can send someone out." He said the birds and vermin couldn't get at the rubbish and the wind couldn't blow it away. "We used to have to empty the bins at Kawaroa and Mt Bryan Reserve about once a day at this time of year. Now, a collection crew is sent only every second day and even then the bins aren't full, thanks to the rubbish being compacted.

"The bins tell us when they require emptying and when they're being used, so we can keep track of any trends." A passerby said he used to work for Armourguard and every night the bins had rubbish around them despite people trying to push the rubbish down, but the new one was "brilliant".